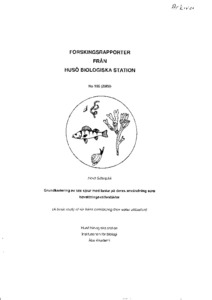 In summer 2001, hydrography, zoobenthos, aquatic vegetation and standing crop of crayfish and fish
Two of the studied lakes, Toböle träsk and Lavsböle träsk are used as drinking water reservoirs and the water in all six lakes is used for irrigation. The aim of the study was to investigate how water utilization affects water quality, flora and fauna in the studied lakes, and to col/ect data that can be used as reference in furher studies.
All lakes but Bjärströms träsk and Degerbergsfjärden had anoxic conditions in the deep /ayers at the deeper sampling station. Nutrient concetrations were also higher in the deeper anoxic /ayers than in the oxic layers. The aquatic vegetation had not changed considerably when compared with earlier studies but some sensitive species were no /onger as common as before, e.g. Lobelia dortmanna was now found only at one place in Lavsböle träsk.
The studied lakes differ greatly from each other regarding size, depth, surroundings and utilization which makes it difficult to campare them with each other. Due to this futher surveillance is of importance. Also guidelines for water levets and utilization, especially during extremely dry periods, should be stated and followed.