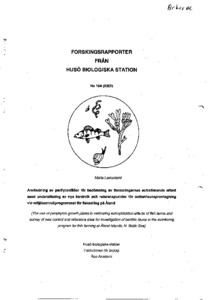 Use of periphyton growth plates for monitoring purposes was studied in the summer of 2001
around five fish farms in the Aland archipelago. The gowth plates were incubated for two weeks
and growth of periphyton was measured as the amount of chlorophy/1-a (mglrrf) extracted from the
filters used as growth plates.
Due to loss of filter the results were indistinct but indicated a connection between the amount of fish farmed and periphyton growth. Time of year also seemed to be of importance for the growth of periphyton.
According to proposal by Mehtonen (2000), new control and reference sites were surveyed for benthic fauna control. Species compostition, abundance and biomass of benthic fauna as we/1 as
structure and organic content of the sediment were studied.
The results showed that some of the suggested control and reference sites were not suited for bottom fauna sampling and new sites therefore need to be found.