On Death and Grieving in Three English Novels : Applying the Kübler-Ross Model to Literature 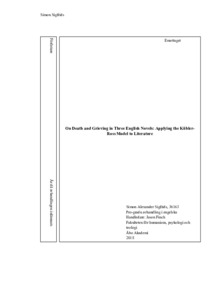 The objective of the thesis is to investigate whether a psychological model intended for use on real people can be used to understand the grief of literary characters as well. Secondarily, the text also discusses whether or not such an understanding can be used to allow one to understand the grief of real people as well, if an understanding of literature leads to an understanding of reality.
The theory used for this examination is the stage-based 1969 Kübler-Ross model which outlines the phases one goes through after experiencing a major emotional trauma, i.e. denial, anger, bargaining, depression and acceptance. The stages do not necessarily occur in that order, but denial typically comes first and acceptance last. The novels used are William Faulkner‟s As I Lay Dying (1930), Kazuo Ishiguro‟s Never Let Me Go (2005) and Jim Harrison‟s Returning to Earth (2007). These novels were selected due to the different forms of grief and grievers they illustrate, as well as representing a difference in both time and place of origin.

The grief in As I Lay Dying is very complex and not all of the characters are able to go through the entire Kübler-Ross grieving process, or even grieve in a normal manner at all. Their mentalities are frequently so different from that of real people as to be almost alien, and the applicability of the Kübler-Ross model is thus sometimes hindered. Regardless, it still functions to an adequate degree.
Never Let Me Go is narrated in retrospect and the grief therein is thus often fragmentary, particularly when the topic is the narrator‟s childhood, but it grows in detail as the narration approaches the present. The many causes of grief in Never Let Me Go are most often not caused by a death, but rather by relatively minor events, indicating that it is not the nature of the loss that is critical to the existence of grief but rather its emotional impact.
Returning to Earth depicts grief both before and after the death of a family father, but unlike the other two novels it also displays the process of dying from the father‟s own perspective. However, it runs into problems with the Kübler-Ross model as it skips the first few months following his death, thus leaving out a critical part of the grieving process.

The Kübler-Ross model is useful to some degree for understanding the grief of literary characters, but it inevitably encounters difficulties. The grief depicted in the novels analysed often does not function in the same way as real-life grief, be it due to the use of literary techniques such as time skips or retrospective narration from memory, or the unusual mindset of the characters. The fundamental problem is thus that since the model is intended for use on real people, it cannot be applied to literary characters without issue. Still, it is possible that it is more accurate if the characters and style of the novel mirror reality more than the ones used here. The same applies to a potential understanding of real people as a result of an understanding of literary characters.