The early history of religion (dis)proving its truth 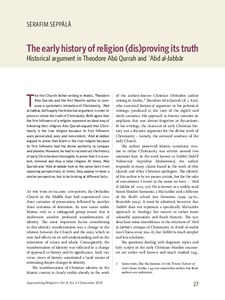 The first Church father writing in Arabic, Theodore Abu Qurrah, and the first Muslim author to compose a systematic refutation of Christianity, ʿAbd al-Jabbar, both apply the historical argument in order to prove or refute the truth of Christianity. Both agree that the first followers of a religion represent an ideal way of following their religion. Abu Qurrah argued that Christianity is the true religion because its first followers were persecuted, poor and non-violent; ʿAbd al-Jabbar argued to prove that Islam is the true religion because its first followers had the divine authority to conquer and plunder. However, he had to reconstruct the history of early Christendom thoroughly to prove that it is a violent, immoral and thus a false religion. At times, Abū Qurrah and ʿAbd al-Jabbār look at the same facts from opposing perspectives; at times, they appear to have a similar perspective, but to be looking at different facts.