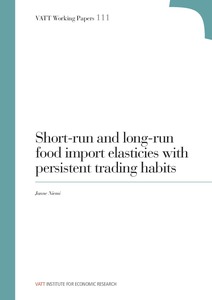 This paper provides estimates and explores the role of own price import demand (Armington) elasticities between different source countries for five agricultural commodities in a framework that incorporates temporal dimension formulated as trading habit persistence. The estimations employ FAO’s bilateral food commodity trade database, complemented with importer and exporter country characteristics from other data. The results support the hypothesis that trade patterns are persistent the adjustment following price changes takes effect with delays. Apart from the evidence for the presence of habit persistence and hence different short and long-term elasticities in general, significant differences between countries are also evidenced, in particular between high- and low-income countries and between main geographic areas. Consistently with the barriers for market entry considerations we also observe higher persistence downwards than upwards.