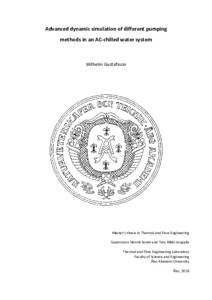 The International Maritime Organization has introduced stricter energy efficiency demands to compel ship builders to further reduce emissions on, e.g., cruise ships. Heating, ventilation and air conditioning (HVAC) represents approximately a third of power consumption of the cruise ship hotel, which makes it an interesting target for improvements in energy efficiency.
Older cruise ships have no way to control the pumping in the AC chilled water system. The prices on variable speed drives have recently dropped, making it more profitable to reduce pumping power. Driving the system with a constant pressure difference instead of a constant flow could cut down on pumping power significantly.
The goal of this thesis was to study the AC chilled water system and construct a simulation model that could be used to validate the savings of different pumping methods. The model was to be well-documented and modifiable for possible future use.
A simulation model was built in Apros dynamic simulation software. The model was successfully validated using data from an existing ship. The different pumping methods were simulated and the results were compared and analyzed. The simulation results showed that the variable primary flow method would save considerably pumping power.