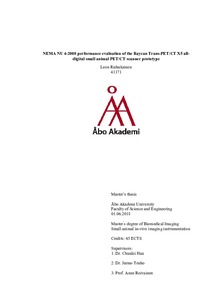 By using a standardized measurement protocol, this study focused on evaluation of an all-digital Raycan PET/CT scanner prototype that was installed in Turku PET centre in May 2017 as a part of a research collaboration between Turku PET Centre (Turku, Finland) and RAYCAN Ltd/RAYDATA Ltd (Wuhan, China). In addition to testing the system performance in accordance to NEMA NU-4 2008, the image quality of Raycan scanner was compared with Inveon and Molecubes systems currently in use in Turku PET Centre. Additionally, comparative imaging of live animals was performed on Raycan and Inveon systems. Finally, the measurement results were compared with other systems measured in accordance to the standard reported in the literature.
The image quality test for Raycan system with 3D OSEM reconstruction algorithm and low post filter setting resulted in 4.59% standard deviation in uniformity, recovery coefficient values between 0.1 and 0.93 and spill-over ratios for water and air regions 14.27% and 22.75% respectively. The total absolute sensitivity obtained from single slice rebinned data is 87.29% and average absolute sensitivity is 0.87%. Using single slice rebinned data, in rat-sized phantom the true counts peak is 73.9 kcps and noise equivalent counts peak is 64.3 kcps, both at 56.53 MBq activity. For mouse-sized phantom, the true and noise equivalent count peaks are 152.8 and 141.3 kcps respectively at 55.94 MBq activity. Spatial resolution was calculated from 2D FBP and SSRB data without filter and at the center of field of view produces 2.15/2.30/1.34 mm FWHM resolution values for radial/tangential/axial directions. The corresponding values become 2.13/2.93/1.52 at 25 mm radial offset from the center of FOV and then rapidly become worse at 50 mm and beyond.
Animal imaging revealed that the system has problems with activity estimation for high uptake values during dynamic scans, but generally produces good quality images. In conclusion, it was determined that the prototype currently has average performance compared to similar systems available on the market.
Considering the improvement potential and the upgrades promised by manufacturer, it is a promising system with competitive prospects in the global market