Knowledge and Identity within the Finnish Fringe-Knowledge Scene 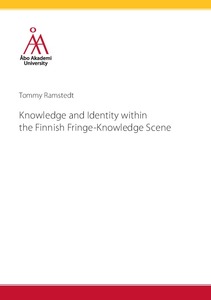 This thesis is a study of the Rajatieto scene in Finland. The Finnish word rajatieto (Fringe-Knowledge) was created in the 1970s by a group of people interested in ufology, spiritualism and different kinds of alternative worldviews. The main research questions focus on how leading people within the scene conceptualize Fringe-Knowledge and how their identity is constructed in relation to various types of worldviews that are usually rejected by the mainstream. The theoretical framework includes the concepts identity and knowledge. A central aspect of identity is that it consists of a process of creating boundaries with the self and something other. This study further goes into dialogue with the theoretical concepts ”cultic milieu” (Campbell 1972), ”rejected knowledge” (Webb 1974), and ”stigmatized knowledge” (Barkun 2013).
The study utilizes and develops the methodological framework of scene in order to study and conceptualize the Fringe-Knowledge environment. The scene framework is used when an environment has some type of sense of itself and considers itself to consist of a distinct group of people. The most important aspects of the scene framework is to study the infrastructure of a scene, and how the scene is discursively constructed by its members. The infrastructure of the Fringe-Knowledge scene consists of a number of associations, magazines, and events. Fringe-Knowledge is constructed by its proponents as constituting a form of knowledge that is beyond, and often in conflict with, current established science. Identity and knowledge intersect in the scene, as people within it consider themselves a special kind of people who possess special knowledge. The events are described as safe havens where these people can meet and be themselves. This study provides detailed information about a certain part of the religious landscape of Finland. By utilizing the scene framework this study develops the scene methodology for the study of alternative spiritual and religious spaces. The questions of identity and knowledge show how a certain type of people construct their self-understanding in a late-modern context.