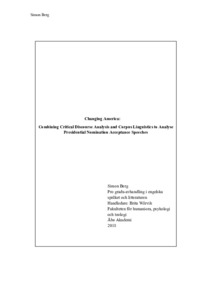 The aim of the study was to learn if there is any truth to the claims that Donald Trump has caused a new, harsher political discourse. This was done by analysing the presidential nomination acceptance speeches by Bill Clinton, George Bush, Barack Obama and Donald Trump.The speeches are the first public appearance by the candidates after being elected as candidates for their party, and signals the beginning of the Presidential election campaign.