Involuntary Placement and Treatment of Persons with Mental Disorders : A Shift in the Human Rights Paradigm 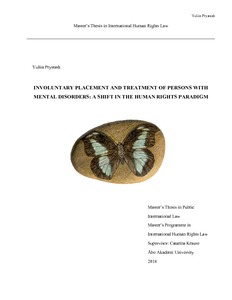 Mental health laws worldwide authorise involuntary hospitalisation and treatment of persons with mental disorders. The debate over the future of mental health care has spurred two competing positions: one supporting traditional resort to compulsion in psychiatry, and the other arguing that such practices are incompatible with the newly emerged human rights standards. This study explores the permissibility of involuntary interventions in mental health care under international and regional human rights law.

In pursuing the aim of the thesis, various legal sources are analysed, most valuable being binding instruments. The latter include, inter alia, the United Nations Convention on the Rights of Persons with Disabilities and the European Convention on Human Rights. It is demonstrated how the obligations set forth in these (and other) instruments in relation to mental health care are inherently conflicting. ‘Soft law’ sources, international and regional jurisprudence as well as scholarly literature shed more light on this conflict of norms.

The study is structured around three major subjects: legal capacity, involuntary placement and involuntary treatment. Since the deprivation of one’s legal capacity often leads to other non-consensual interventions, the corresponding chapter is useful in understanding the subsequent ones. The chapters on involuntary placement and treatment are organised by contemporary approaches to compulsory care, i.e. traditional, disability-neutral and revolutionary. Each of these approaches will be backed up by relevant international and regional instruments and jurisprudence.

This work pays considerable attention to the approach taken by the United Nations Disability Convention as the treaty has inspired other instruments and bodies to adopt similar perspective. This approach emphasises everyone’s legal capacity and the right to consent to treatment. However, important drawbacks of such proposition are also explored, which come down to it being unrealistic to implement. Several ways to reconcile revolutionary approach to mental health care (‘no forced interventions allowed’) with the traditional one (‘involuntary interventions as last resort’) are offered.

Ultimately, the resolution of the research problem largely relies on which interpretation of the norms we adopt. For example, the CRPD Committee believes that the treaty outlaws all forms of involuntary interventions on the basis of (mental) disability. Other international and regional bodies argue that human rights law allows for exceptions to the principle of informed consent. Overall, the answer to the research question is affirmative: involuntary placement and treatment are allowed under international and regional law as long as they are not linked to the person’s disability. Otherwise such interventions would be discriminatory in nature and thus in breach of human rights law.