Not Only Bad Luck : Studies on Peer Victimization and Social Exclusion from a Multilevel Perspective 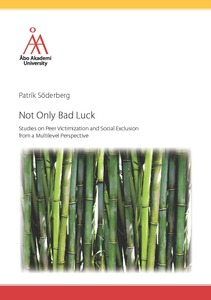 The purpose of this thesis was to examine the association between peer victimization and psychosocial adjustment at both individual and system levels. To this purpose, ethnographic reports from nomadic forager band societies around the world were reviewed (Study I), and regionally representative survey studies were conducted among adolescents in Ostrobothnia, Finland (Studies II–IV).

The ethnographic reports suggested that ostracism and exclusion are cross-cultural phenomena that foster conformity, and, furthermore, that an ostracism-detection system would have been adaptive in the evolutionary past. The quantitative studies, which were analyzed by means of mediation analysis, multilevel modelling, and multinomial regression, found peer victimization to be associated with individual level maladjustment indices, such as depressive symptoms, aggressive behavior, and peer rejection. In particular, the notion of symptom-driven pathways as well as the influence of the family environment on peer relationships was explored in Study II, where physical punishment was identified as a precursor to depressive symptoms, aggressive behavior, and victimization by peers. The role of the family was also indicated by the association between family economy and victimization experiences in Study III. Furthermore, Study III found victimization prevalence to be associated with classroom norms and social structure, thus highlighting circumstances in which bystanders may be particularly wary of intervening against victimization for fear of becoming the target themselves. Finally, Study IV found that while relational dynamics beyond victimization frequency influence the severity of victimization experiences, frequent peer victimization was also uniquely connected to internalizing and externalizing behaviors.

These empirical investigations are discussed in terms of the concept of peer victimization, the bi-directional relationships between victimization and maladjustment, and the influencing factors at multiple levels of the socio-ecological environment of the victim.