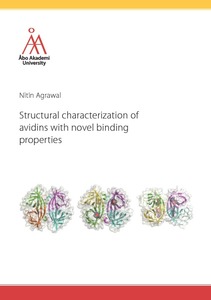 Avidin (Avd) is a protein first discovered in chicken egg white, and later in other birds, reptiles, amphibians and lancelet. Apart from these eukaryoticspecies, Avd is also identified in few fungal and in many bacterial species,the most well-known being streptavidin from Streptomyces avidinii. Avds are highly stable, homotetrameric – and in some cases dimeric – proteins, known for their extremely tight binding affinity to biotin; Kd~10-15 M for chicken Avd is the highest affinity observed for noncovalent ligand binding to a macromolecule. Due to the high affinity of Avds for biotin, the Avdbiotin binding system has been utilized in numerous life sciences applications in the field of biotechnology, medical diagnostics and nanotechnology.
Our collaborators have earlier developed circularly permuted, engineered Avd forms, dual-chain (dc) and single-chain (sc) Avds, which contain two and four, respectively, Avd subunits incorporated into one polypeptide chain. Each “domain” in dc and sc Avd thus corresponds to a monomer in wt Avd and have fully functional, high affinity biotin-binding site, which can be independently modified. The aim of this thesis was to structurally characterize novel Avd proteins, both natural and engineered forms, which bind non-biotin ligands, e.g. peptide ligands, steroids, and other small molecules. This provides the opportunity to create engineered dc or sc Avds, containing two or four distinct Avd domains having varied ligandbinding affinities for biotin, or non-biotin ligands. This thesis focuses on the structure determination of several Avds that recognize ligands different from biotin, which could be incorporated into engineered dc and sc Avds with a mixture of ligand preferences.
A number of artificial chicken Avd-based proteins, collectively called ‘antidins’, were designed through random and specific mutations and selected to bind ligands other than biotin. An engineered steroid-binding antidin, binding progesterone with micromolar affinity, was selected for crystallization trials. We solved the crystal structures of the steroid-binding antidin, sbAvd-2 (I117Y) without [Protein Data Bank code (PDB):4U46] and with [PDB:5LUR] progesterone bound to each monomer of the tetramer. We also modelled several high-affinity progesterone-binding antidins possessing nanomolar affinity for the progesterone ligand, and performed computational docking experiments on them to assess their complexes with progesterone and biotin. This enabled us to evaluate possible interactions of antidins with these small molecules, even without their X-ray structures.
The natural tetrameric Avd, bradavidin from Bradyrhizobium diazoefficiens, a nitrogen-fixing bacterium present in the root nodules of soybean, provides novel opportunities for biotechnological uses of Avds because the wild-type (wt) bradavidin has a unique intrinsic C-terminal peptide ligand known as ‘Brad-tag’ bound to the binding site of the neighboring subunit. We have solved the X-ray structure of corebradavidin – an engineered form of wt bradavidin, where the C-terminal residues Gly114-Lys138 have been truncated, including the Brad-tag residues Gly129-Lys138 – in complex with biotin [PDB:4BBO]. Comparison of the wt bradavidin—Brad-tag and core-bradavidin—biotin binding mode elucidated the conformational changes required in the bradavidin binding site to accommodate the two different ligands (Bradtag vs. biotin). To better understand the mechanism and usefulness of Bradtag as an intrinsic ligand, we also modelled the structure of two proteins containing the Brad-tag sequence and which likely binds it: rhodavidin from Rhodopseudomonas palustris, and bradavidin A2 from Bradyrhizobium sp. Ai1a-2.
The Avds detailed in this thesis include natural Avds binding intrinsic peptide ligands and artificial Avds, created through engineering or random mutagenesis, binding steroids or other small molecules. This study provides opportunities to design Avd-based scaffolds with tailor-made affinities for novel non-biotin ligands. These “domains” can be envisioned to be utilized as monomers per se in dimeric or tetrameric Avds, or as domains integrated into dc or sc Avds, designed for various bio(nano)technological applications in which simultaneous recognition and/or crosslinking of multiple molecular entities is advantageous.