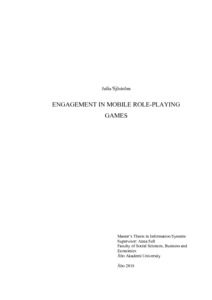 The purpose of this thesis is to examine which elements make role-playing video games (RPG) engaging, and how these elements could be incorporated into an RPG specifically designed for mobile platforms. Mobile games are generally simpler than computer or console games due to hardware limitations. As such, not all elements of computer or console RPGs may be possible to implement in a mobile game.
Since there is no common definition as to what the word engagement means, this thesis defines it as an umbrella term for positive feelings such as fun, enjoyment, flow and immersion. A literature review found that the most commonly identified engaging factors was challenge/difficulty, followed by visuals, control, social interaction, character, story, goals and adventure. These elements were incorporated into a mobile RPG called Wither, which was developed for this thesis using the Unity game development platform. Wither is built with a standard RPG structure in mind, including a fantasy-themed story and 2D setting, combat, an explorable open world and multiplayer support. A more unique addition is an “exercise mode”, which rewards players for getting active in order to encourage breaks between play sessions.
A test group of twenty survey participants were divided into pairs and asked to play the game for a day, after which they answered the Game Experience Questionnaire (GExQ). The GExQ consists of several statements about the participants’ feelings of the game, which the participants had to rate on a scale from zero to four. Open-ended questions were added to gather data more specific to the purpose of this thesis. The participants rated the game high on most positive measurements of the questionnaire and low on the negative measurements, indicating that they found the game mostly engaging. The engaging aspects were mostly rated in unison with what was identifies in previous research, with challenge being ranked the players’ top one favorite aspect of Wither the most often. The challenge measurement of the GExQ was also the most diffuse measurement according to participants’ comments afterward, which could have affected their ratings of it. Overall, due to the small number of survey respondents, there is a chance that some of the correlations found in the survey are just random. The results should be verified with a larger sample size.
Despite not being able to measure which elements in the game specifically made it engaging, it can be concluded that the factors identified in the literature review can be modified for a mobile game, and a mobile game with these elements can be found enjoyable. Future research could study which elements make specifically mobile platform RPGs enjoyable to further specify what mobile RPG designers should keep in mind versus console or computer RPG designers, and to which extent the specific way the engaging elements are implemented impacts on a player’s experience.