Risk factors for hoarseness and vocal symptoms in children 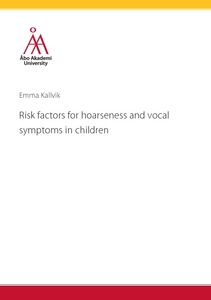 The importance of a well-functioning voice is increasing for the working population as more and more persons are working in voice demanding professions. Most of the children growing up today will depend on their voice to perform in their future professions, and if the voice does not function as expected, this could interfere with their ability to perform at work. Besides being a tool, the voice quality also gives us clues about the person speaking. If the voice is hoarse or otherwise affected, this could lead to false assumptions about the speaker. It might not be necessary to provide direct voice therapy to all hoarse children, but knowing who is at risk could help in deciding which groups would benefit from voice screening. Knowledge about potential risk factors for hoarseness or other vocal symptoms could also be used for prevention, or as a first step in an intervention.
The aim of the present thesis was to investigate the prevalence of hoarseness and other vocal symptoms in four different groups of children and to identify possible risk factors for hoarseness and other vocal symptoms.
Both the participants in Study I and in Study II were 6 – 9-year-olds. In Study I, they were a normal population of 217 children and in Study II, they were 1857 children that either had attended an educational setting in a building with indoor air problems due to moisture damage or were part of a control group. The participants in Study III were a group of 108 children with allergy and/or asthma, aged 0:9 to 17:1 years. In Study IV, the participants were a normal population of 489 children that participated in the multidisciplinary cohort study Steps to the Healthy Development and Well-being of Children (the STEPS study).
In all four studies, data were collected with questionnaires that were filled in by the parents of the participating children. In the first study, teacher questionnaires and perceptual evaluation by eight trained listeners was also used. In Study IV, health related information was recorded in a diary filled in by the parents and data on hospitalizations and physician visits were obtained from the electronic registry of the hospital district. At the onset of a respiratory tract infections during the first two years of life, nasal swabs were taken for virus identification.
The prevalence of hoarseness in the normal population of children was 12 % and the prevalence of frequently occurring vocal symptoms was 6 %. The children with allergy and/or asthma had a prevalence of frequently occurring vocal symptoms of 18.2 %. Of the children who had attended an educational setting in a building with indoor air problems due to severe moisture damage, 9.3 % were hoarse every week or more often. The results of Study II showed that indoor air problems due to moisture damage contribute to a more frequently occurring hoarseness. Cough seemed to be connected to both vocal symptoms and hoarse voice quality. In Study II, both phlegm cough and dry cough were significant predictors for frequently occurring hoarseness. In Study III, prolonged cough had a significant connection to frequently occurring vocal symptoms. Other risk factors that had a connection to hoarseness and frequently occurring vocal symptoms were: nasal congestion, inhalant allergy, heavy voice use as an infant (for girls), being the youngest sibling (for boys), and the number of respiratory tract infections that have led to hospitalization.
Based on the results of this thesis, health conditions that cause cough seem to have a connection to hoarseness and frequently occurring vocal symptoms. Because cough is a common symptom of respiratory tract infection, it is also reasonable to assume that the children that have been hospitalized because of a respiratory tract infection could have had cough. The common feature of all risk factors identified in this thesis is that they subject the vocal folds to mechanical strain. The exact mechanism for this needs to be investigated further. Based on the results of this thesis, it would be recommendable to elucidate and treat cough in children. It would also be important to screen children with allergy and/or asthma for vocal symptoms. The risk factors identified in this thesis could be included in the pediatric voice anamnesis.