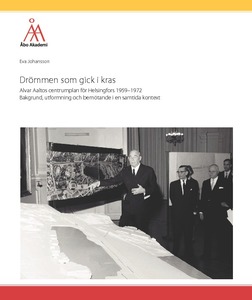 Despite an abundance of literature on Alvar Aalto’s (1898–1976) life’s work, his city centre plans and the city centre plan for Helsinki in particular have not been studied in depth. The Aalto Helsinki plan was the last in a series of unrealised plans which were designed to move the main city centre of Helsinki towards the north. In contrast to earlier plans, Aalto’s city centre plan was twice approved by the city council as a basis for further planning.
The objective of this study is to improve the understanding of why the city centre plan for Helsinki, which Aalto worked on between 1959 and 1972, was not implemented. The background and creation of the plan are documented, after which its reception, which changed from initial admiration to final rejection, is analysed. A case study is used as the research method, and Bourdieu’s field theory and concepts are used as a framework for the examination of the internal relationships and positions of power of the various interest groups. The study is conducted in a political and city planning ideological context. Additionally, different views on functionalist city centre planning are compared. The primary objective is to relate Aalto’s interpretation to le Corbusier’s theory.
Public documents concerning the decision-making process and the further development of the city centre plan as well as Aalto’s own descriptions constitute the most important primary sources. Both elected and employed officials in the city administration as well as Aalto’s colleagues have contributed valuable oral information, without which a reconstruction of the events would have been virtually impossible. Research literature on CIAM and Team 10 are important for an understanding of why opposition formed among architects against Aalto and his city centre plan.
It is obvious that Aalto was among the first to focus on the shortcomings of the functionalist idea of a city centre; his life-long goal was to improve the functionalist heart of the city. In this thesis, his search for symbols of democracy is also highlighted. This coincided with his clients’ wishes to make the city centre of Helsinki a symbol of an independent nation. Various cultural buildings gathered together as an architectural whole, Parliament House, an accentuation of nature and incorporation of the landscape as a symbol of freedom were the answers in Helsinki. An examination of the decisions that formed the basis for the city centre design shows that Vapaudenkatu was one of the starting points. This was a given, and not Aalto’s own idea.
One important finding of the study is the insight that Aalto’s city centre plan was actively opposed. With the support of the Deputy Lord Mayor, officials started to delay the city centre plan to promote the metro project already around the turn of the year 1962–1963. The opposition continued at the political level until the decision to build a metro was made in 1969. Changing city planning ideals and political priorities contributed to the fact that Aalto’s plan began to be seen as outdated during the latter half of the 1960s. A location-specific, symbolic and history-based design was to be replaced by anonymous, universal and flexible solutions. Despite this, Aalto’s revised plan from 1972 constituted the basis for planning until the beginning of the 1990s.