The role of keratins in proliferation, differentiation and hypoxia signaling in colonic epithelia 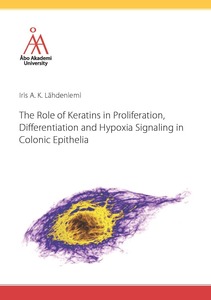 Keratin (K) intermediate filament proteins are important in stress protection and in providing mechanical support to colonic epithelial cells. Deletion of K8 in mice (K8-/-) leads to colonic epithelial hyperproliferation, mistargeted membrane proteins, diarrhea and a Th2-type colitis. However, the reasons for hyperproliferation in K8-/- mice are not fully understood. In addition, it is not known if keratins modulate colonic epithelial cell differentiation, or if the colonic epithelial oxygen balance is affected by the deletion of keratins. In the studies included in this thesis, it was hypothezised that keratins are important in these cellular processes.
Proliferation of colonic epithelial cells is followed by differentiation, which is highly regulated by Notch signaling. However, the regulation of Notch signaling in the colonic epithelium is not fully understood. Our aim was to investigate if keratins have an impact on epithelial cell differentiation and Notch signaling. By immunoprecipitation and proximity ligation assays, we identified K8/K18 as an interaction partner with Notch. Notch protein levels and target gene transcription were decreased in K8-/- mice and Caco-2 cells. However, the K8 dependent Notch phenotype could be rescued by reinsertion of K8/K18 in vitro. Furthermore, overexpression of a mutated form of K8 where serine 74 has been changed to alanine resulting in inactivation of phosphorylation on this site, increased Notch1 protein levels. Despite this, K8Ser74Ala could not rescue the expression of the Notch1 target gene Hey1 in K8-/- Crispr/Cas9 Caco-2 cells. Therefore, keratin phosphorylation could play a role in the link between K8 and Notch. In vivo, K8-/- mice exhibit an unbalanced colonic epithelial cell differentiation, with a shift towards the goblet cell fate, a phenotype that can be explained by a decrease in Notch signaling.
K8-/- mice do not develop spontaneous tumors but express many hallmarks of cancer in their colonic epithelium. These include hyperproliferation and colonic inflammation, which both can be regulated by STAT3 signaling. In the second study, our aim was to investigate if the lack of keratins predisposes mice to colorectal cancer (CRC). K8-/- mice were dramatically more susceptible to induced CRC in a genetic and a chemical cancer model, compared to K8+/+ mice. This could be explained by an increase in the activity of STAT3 and levels of IL-22 after K8 deletion. Furthermore, investigation of proteins upstream of IL-22 revealed that K8 co-immunoprecipitaes pro-caspase 1 of the inflammasome and could thereby modulate cell inflammation and proliferation signaling in colonic epithelium.
Hypoxia signaling pathways are active in the colonic epithelium and are important in the development of cancer. Using microarray analysis, several genes associated to hypoxia were altered in K8-/- colonic epithelial cells. As a result, our aim was to investigate if keratins participate in the hypoxia signaling pathway and if keratins are altered during acute hypoxia in colon epithelium. Decreased levels of hypoxia inducible transcription factor 1 alpha (Hif-1α) could be detected in K8-/- mice together with decreased activity of several Hif-1α target genes, such as VEGF-A2 and Bcl2. Deletion of K8 with Crispr/Cas9 from Caco-2 cells resulted in increased Hif-1α protein levels in acute hypoxia, with a robust increase in Hif-1α translocation to the nucleus of K8-/- cells compared to K8+/+ cells. This proposes that keratins participate in the regulation of the Hif-1α signaling pathway. Additionally, K19 and K20 were upregulated in acute colonic hypoxia in mice, suggesting that hypoxia is an additional stress where keratin levels are increased.
In summary, keratins are novel regulators of colonic epithelial cell proliferation, differentiation, hypoxia mechanisms and can modify cell signaling proteins in epithelia.