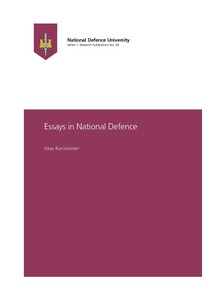 For many small countries with a long history of conflicts with a large neighbouring country, the question of national security has a high priority. Alternative survival strategies include a sufficiently strong defence capability in terms of the defence design and quality of defence materiel or, alternatively, a membership in a defence alliance. Such choices should be based on cost/benefit analyses. The urgency of such analyses becomes burning if tensions arise for one reason or another or if the available options change and attract public discussions, or if the safety class of the country has deteriorated.

In Finland, the choice between a military draft (conscription) and an all-volunteer professional army has been the subject of continuous debate over the years. Moreover, as a result of Russia’s occupation of Crimea in 2014 and the subsequent Ukraine crisis, tensions also intensified in the Baltic Sea area. After the Cold War, there was a peaceful period in Western and Central Europe. However, subsequent aggressive political tensions grew. As a response both in Finland and in Sweden, the issue of a potential membership in NATO, the North Atlantic Treaty Organization has been at the core of the debate. As a result of increased tension, Sweden has regretted its abolishment of the draft and its demilitarisation of Gotland Island. It has tried coming back to a partial draft army, but with limited success.

The issue of how much to allocate resources to national defence has to do with the valuation of the willingness of the country’s citizens concerning the importance of national security. In repeated surveys, such willingness is appreciated by more than 70 per cent of the population in Finland. This is apparently based on the history of the country with repeated aggressions between the Swedish and Russian empires and the attacks by the Soviet Red Army at the beginning of and during World War II.

Analytical views on motives behind countries’ fighting have attracted a lot of attention in the theory of conflicts. However, no behavioural theory has been analytically formulated in terms of the risk-taking attitudes of individual soldiers, particularly in a defending army against a larger predator. The current study aimed to produce such an analysis, suggesting a theory of commitment to defend in the spirit of intertemporal altruism across generations. Such an analysis is included as the first article in the current collection. It is extended to study the possibilities of creating deterrence against an attacking army by means of communication and the signaling of the willingness to defend itself. The approach employs game theoretic tools. The second article focuses on the issue of army design through a draft or is alternatively based on a professional army. The third article derives the mathematical option value for a membership in a defence alliance in terms of a coalition theory. In both of them, the analysis is based on a cost-benefit approach. In both articles, the key analytic concept to start with is the risk classification of a country.

The key building block in setting up the national defence is based on the acquisition of appropriate defence materiel. Two articles in this collection provide multi-stage analytic decision-theoretic approaches for two issues, i.e. offsets and joint procurements. No previous economic theory of offsets is available in the existing literature. The issue is timely, as Finland has launched its plan to replace its current F/A-18 fighters with a new type of fighter in the coming years. Joint procurements in the acquisition of defence material between independent countries make sense as they seem to be economically justified. In reality, few have actually taken place. The fifth article in the current collection attempts to explain why this is probably the case. For example, efforts to jointly carry out the acquisition of the NH90 helicopters among four Nordic countries failed. Moreover, despite the obvious benefits of joint procurements between the small Baltic states, they never appear to take place.

Finally, the cyber technologies appear to provide a new and complementary instrument for conventional armament. In 2010, the world learned about Stuxnet, a malicious computer worm believed to be jointly created by American and Israeli cyber weapon specialists. Experts have been convinced that Stuxnet was meant to sabotage the uranium enrichment facility at Natanz in Iran and its centrifuge operational capacity, but the damage spread to other units, too. It is believed that most of the infected computers worldwide by Stuxnet have been in Iran. The Stuxnet attack is the background for the last article in this collection. It explains why cyber technologies have potentially led to a new era of warfare between hostile countries.

The aim of the current study is to address the issues related to factors or decisions that determine the national security in a small country: the willingness to defend, the army design, potential membership in a military coalition, the acquisition of the defence materiel, and the role of cyber capability as a new type of warfare. The approach of the current collection of studies is based on the employment of economic tools and includes economic cost/benefit analyses, mathematical optimisation methods, game-theoretic models, extensions to the Tullock model in contests, and the Nash bargaining approach in arriving at contracts. National security is viewed as a public good and the question is how to incentivise the decision-makers to arrive at the best policies. Tools of information economics are relevant, as a small defending country must try to communicate and signal to a potential predator its commitment to defend.

Analytic economic methods are not that typical in the discussions and debates on national security in our country. One reason may be that the war games in such an approach take place in a fictitious mathematical world. It is hoped, however, that with its theoretical results, the current study is able to deliver a message of the usefulness of economic and mathematical tools for conflict studies. Starting with his works in the 1920s, the game theory was initially developed by the Hungarian mathematical genius, John von Neumann. His focus, however, was on zero-sum games, yet typical confrontations in politics or conflicts are not necessarily characterised by zero-sum games. Instead, the Coase theorem suggests the opposite: a peaceful settlement of issues is Pareto- efficient and should lead to a surplus-maximising win-win outcome. Then, the issue arises as to why a commitment to a no-fight equilibrium is so difficult to obtain in the real world. The subsequent development of game theory has moved in other directions: negotiation, bargaining and signaling under informational restrictions. The pioneering work by Thomas C. Schelling, the Nobel prize winner in economics in 2005, characterised the key elements in war games. In his Nobel prize lecture, he expressed his delight on that the world had been able to live without a nuclear war for over sixty years. The famous lesson stated by the Prussian General von Clausewitz in the 19th century on “…not [taking] the first step without considering the last” is one of the corner stones of the modern dynamic game theory.

The purpose of mathematical models employed in economics is not to say that they represent the real world. The model world is fictitious and it exists only in the brains of the researchers – and in their publications. Their justification arises from their operation as helpful instruments in checking the validity of thinking and of the stated arguments. Human brains make mistakes, but the mathematics does not. The purpose of models is to build into the analysis the key mechanisms to be examined, rather than the whole messy real world. Many aspects are therefore left out on purpose without claiming that they are irrelevant. The purpose instead, is to put the focus on the key mechanisms.