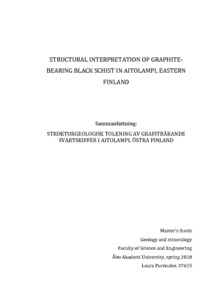 Graphite is a mineral consisting of layers of carbon stacked on top of each other. One layer of carbon is called graphene and forms a two-dimensional lattice. Naturally occurring graphite belongs to the European Union’s top 30 most critical minerals and has a high import reliance rate. Graphite’s economic value and demand is increasing and it has exceptional features within high-tech applications due to its excellent features in conductance of heat and electricity. During the years 1760-1947, 30 flake graphite deposits have been exploited in Finland. According to the Geological Survey of Finland, Finland has a good potential for new flake graphite deposits due to the qualities of the bedrock and a suitable metamorphic grade.
The aim of this study was to interpret the structural setting in Aitolampi area. Data from electromagnetic measurements, stereographic projections, mapping data from drill cores and published studies from the area were utilized. Aitolampi (from Lake Aitolampi) is located in the town called Heinävesi, in southern Savonia, eastern Finland. This particular area was chosen because graphite occurrences have been known in the nearby Haapamäki area since the late 19th century. The electromagnetic measurements and geological mapping and sampling have given positive results regarding the presence of graphite in the bedrock.
Interpretations of the stereographic projections points to a large-scale double-plunging antiformal structure, with fold axes in both northwest and southeast. Based on the structural measurements from drill cores, 2D cross sections of the structural setting were constructed. The folds present in Aitolampi are isoclinal and the axial planes are inclined towards southwest. When the cross cuts are combined with Slingram measurements, it appears that the folds have an undulating hinge-line and the graphite enrichment seems to be located in the antiforms and in the parasitic folds located in the fold limbs. Aitolampi is interpreted to be located between two deformation zones and thrusted upwards from its surroundings, due to the compressional stress.