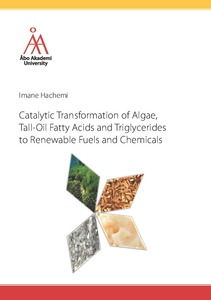 It has become increasingly obvious that sustainable energy is becoming more engaging owing to the eventual depletion of the world reserves of fossil resources of energy and to the increase of the greenhouse gas emissions. Numerous feedstocks are utilized to produce biofuels and biodiesel; however, it is vital that the production does not compete with food resources. Therefore, second generation biofuels produced from algal biomass, lignocellulosic material and waste oil are receiving much attention. Algae as a feedstock for biomass are not competitive with the food supply, their growth rate is faster compared to terrestrial plants and they do not require arable lands to be cultivated. Moreover, algal mass can be fractionated allowing the production of several valuable products. Chlorella microalga fractionation was carried out using different methods, namely direct saponification, in situ transesterification and supercritical hexane extraction.
Fatty acids have high molecular weights and energy densities and would, thus, be suitable feedstock for biodiesel. However, there are a number of refining issues related to algal derived oil, which require further processing, such as lowering of the high oxygen content in the crude oil. Hydrodeoxygenation is an alternative and attractive method for upgrading biodiesel feedstock into a compatible diesel fuel for engines.
Catalytic screening using sulfur-free catalysts and reaction condition optimization allowed the enhancement of the reactant conversion and the product yield leading to an increased selectivity towards aliphatic hydrocarbons.
Nickel supported on HY-80 zeolite catalyst containing 5 wt% metal was synthesized and characterized by various methods. Different fatty acids were hydrodeoxygenated in a semibatch reactor at 30 bar and 300 °C. Kinetic studies of the hydrodeoxygenation permitted establishing plausible reaction mechanisms and different pathways for the reactions. A kinetic model for the hydrodeoxygenation was developed and successfully applied to the experimental data.
Behavior of real feedstock was intensively investigated utilizing both 5 wt% Ni/HY-80 and 5 wt% Pd/C catalysts under similar conditions. The catalyst reusability, deactivation and regeneration were given high importance and thoroughly examined.