Vera Hjelt and the calling of theosophical universal work, 1894–1904 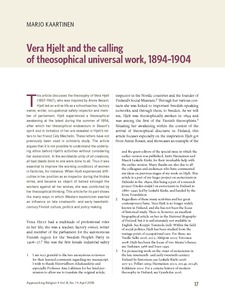 This article discusses the theosophy of Vera Hjelt (1857–1947), who was inspired by Annie Besant. Hjelt led an active life as a schoolteacher, factory owner, writer, occupational safety inspector and member of parliament. Hjelt experienced a theosophic-al awakening at the latest during the summer of 1894, after which her theosophical endeavours in Besant’s spirit and in imitation of her are revealed in Hjelt’s letters to her friend Cely Mechelin. These letters have not previously been used in scholarly study. The article argues that it is not possible to understand the underlying ethos behind Hjelt’s activities without considering her esotericism. In the worldwide unity of all creations, all bad deeds done to one were done to all. Thus it was essential to improve the working conditions of women in factories, for instance. When Hjelt experienced difficulties in her position as an inspector during the Voikka strike, and became an object of hatred amongst the workers against all her wishes, she was comforted by her theosophical thinking. This article for its part shows the many ways in which Western esotericism exerted an influence on late nineteenth- and early twentieth-century Finnish culture, politics and policy making.