'The one and only true and salvational faith' 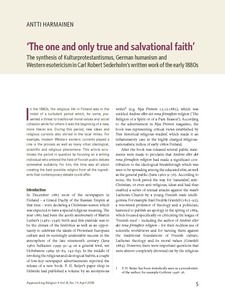 In the 1880s, the religious life in Finland was in the midst of a turbulent period which, for some, presented a threat to traditional moral values and social cohesion while for others it was the beginning of a new, more liberal era. During this period, new ideas and religious currents also stirred in the local milieu. For example, modern Western esoteric currents played a role in the process as well as many other ideological, scientific and religious phenomena. This article scrutinizes the period in question by focusing on a writing individual who entered the field of Finnish public debate somewhat suddenly. For him, the time was all about creating the best possible religion from all the ingredients that contemporary debate could offer.