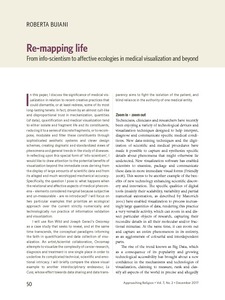 In this paper, I discuss the significance of medical visualization in relation to recent creative practices that could dismantle, or at least redress, some of its most long-lasting tenets. In fact, driven by an almost cult-like and disproportional trust in mechanization, quantities (of data), quantification and medical visualization tend to either isolate and fragment life and its constituents, reducing it to a series of discrete fragments, or to recompose, modulate and filter these constituents through sophisticated aesthetic systems and clever design schemes, creating dogmatic and standardized views of phenomena and general trends in the study of diseases. In reflecting upon this special form of ‘info-scientism’, I would like to draw attention to the potential benefits of visualization beyond the immediate ones deriving from the display of large amounts of scientific data and from its alleged and much worshipped mechanical accuracy. Specifically, the question I pose is: what happens when the relational and affective aspects of medical phenomena – elements considered marginal because subjective and un-measurable – are re-introduced? I will focus on two particular examples that prioritize an ecologic-al approach over the current strictly numerically and technologically run practice of information validation and visualization.

I will use Ron Wild and Joseph Geraci’s Oncomap as a case study that seeks to reveal, and at the same time transcends, the conceptual paradigms informing the faith in quantification and data collection of visualization. An artist/scientist collaboration, Oncomap attempts to visualize the complexity of cancer research, diagnosis and treatment in one single place in order to underline its complicated technical, scientific and emotional intricacy. I will briefly compare the above visual example to another interdisciplinary endeavour, La Cura, whose effort towards data sharing and data transparency aims to fight the isolation of the patient, and blind reliance in the authority of one medical entity.