The 'Beauty Fallacy' Religion, science and the aesthetics of knowledge 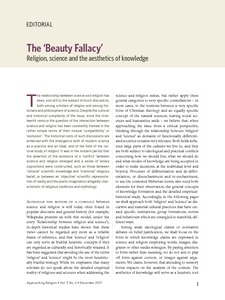 The relationship between science and religion has been, and still is, the subject of much discussion, both among scholars of religion and among historians and philosophers of science. Despite the cultural and historical complexity of the issue, since the nineteenth century the question of the interaction between science and religion has been constantly framed in the rather simple terms of their mutual ‘compatibility’ or ‘exclusion’. The historical roots of such discussions are entwined with the emergence both of modern science as a practice and an ideal, and of the field of the cultural study of religion. It was in the modern period that the assertion of the existence of a ‘conflict’ between science and religion emerged and a series of binary oppositions were constructed, such as those between ‘rational’ scientific knowledge and ‘irrational’ religious belief, or between an ‘objective’ scientific representation of reality and the poetic imagination allegedly characteristic of religious traditions and mythology.