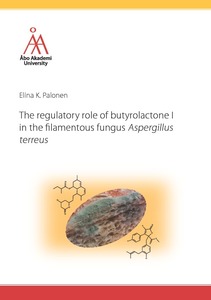 An industrially and pharmaceutically important filamentous fungus, Aspergillus terreus, is known to biosynthesise plentiful natural products including lovastatin, a serum cholesterol lowering agent. A. terreus has also been observed to cause invasive aspergillosis in immunocompromised patients and to show resistance to one of the antifungal drugs, amphotericin B. In some of the Aspergillus spp. the pathogenic features have been observed to include diverse properties of asexual conidia as well.
In bacteria, a phenomenon quorum sensing has been observed to induce a joint activity with the surrounding prokaryotes in response to a specific, cell density reflecting and self-inductive (i.e. autoinductive) molecule of the same species origin. In filamentous bacteria, e.g. Streptomyces spp., small g-butyrolactones have been observed to act as autoinducers with diverse responses to the achieved cell density including secondary metabolism and cellular development. Quorum sensing in fungi has been less studied. In A. terreus a secondary metabolite — butyrolactone I — has been observed to increase the production of two secondary metabolites, lovastatin and sulochrin, and to affect the fungal morphology as well thus giving indications of a similar role as observed in Streptomyces spp.
The central aim of this thesis was to further elucidate the role of butyrolactone I in the fungus A. terreus on the metabolite and especially on the transcriptomic level. To this end, both chromatographic methods with HPLC and MS/MS as well as genome-wide gene expression and transcriptome sequencing were applied.
The positive role of butyrolactone I in lovastatin production was confirmed and its autoinducing feature was revealed together with a potential signalling profile, reminiscent of the quorum sensing phenomenon of bacteria. The suggested positive role of butyrolactone I in secondary metabolism and sporogenesis was further supported by the gene expression profiles of the global regulator, laeA, and the orthologs of the key regulators of asexual conidiation (brlA, abaA, wetA). An in-depth transcriptome analysis revealed also an unknown gene cluster to be regulated in pace with these conidiation regulators and, furthermore, the key enzyme of the cluster showed similarity to a known pigment-producing key enzyme of another fungus of Ascomycota. Moreover, the transcriptome sequencing revealed also interesting splice variants within velvet gene family with numerous regulative functions in the formation of asexual conidia and sexual ascospores of Aspergillus spp. All this rises several hypotheses awaiting further studies.