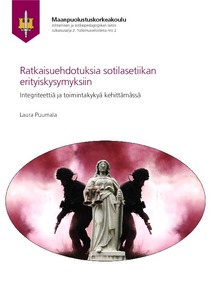 In this treatise I analyze the scope and nature of 21st century military ethics in terms of the demands of modern conflicts and the current military ethical training that soldiers receive. The scope of military conflicts has changed dramatically during the past few decades. This means that the operational environment of the soldier has changed, it now being more arbitrary, ambiguous and unpredictable than before. In this treatise, some of the features of the new operational environment are paralleled with the concept of emergency ethics. Emergency ethics applies in situations where hard ethical choices must be made, where the best course of action is unclear and all the alternatives hold significant moral risks – and yet some action must be taken.

In my attempt to participate constructively in the renewal of military ethical training, I bring elements of medical ethics, including the ethical training of physicians, to the discussion, as those in the medical and military professions alike may have to deal with questions of life and death. Whenever these ultimate questions arise, we may see these professions as ethically sensitive and, as such, sometimes extremely ethically demanding. In these situations, it may be ethically more motivating not to strive to be unequivocally ethically good, but to be at least the best possible soldier and person one can be in that given situation.