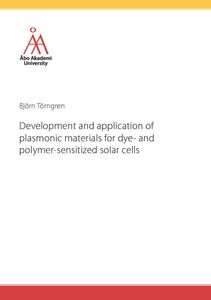 Among the numerous solar cell technologies, emerging thin film solar cells, such as dye-sensitized solar cells, offer the possibility for large-scale integration using sustainable and low-cost materials. In these thin devices, controlling the light absorption on the nanoscale is of crucial importance in order to bring them to their full potential. Plasmonic particles can be utilized to tailor the optical response due to their unique size and shape dependent properties. However, successful integration of these particles into the device structures require careful control of the surface properties as well as chemical and thermal stability.
In this thesis, plasmonic materials with suitable optical properties were designed, synthesized and integrated into polymer- and dye-sensitized solar cells. The chemical and thermal stability of these particles was studied, and their optical effects were modeled. The particles were mixed into printable titanium dioxide (TiO2) pastes or suspensions. The pastes or suspensions were deposited as porous films and the impact of these composite films on the photovoltaic performance of the devices was evaluated.
Gold particles with a protective thin silica shell were synthesized using different coating methods. It was discovered that the coating method greatly influences the shell formation and that the shell quality is of crucial importance for the stability of the gold cores in the chemical environment of the devices. Anisotropic plasmonic particles were also utilized. Gold nanorods with different aspect ratios and thus different optical response were synthesized and added to TiO2 suspensions. However, it was discovered that the nanorods deform at the temperatures normally used for processing the TiO2 films. A TiO2 suspension suitable for low-temperature processing was developed, and the TiO2 films containing nanorods could be prepared with minimal deformation occurring. An enhancement of the current density of the plasmonic devices could be seen, which was correlated to an increase in the incident photon to electron conversion efficiency (IPCE) spectra due to nearand far-field effects originating from the plasmonic particles.
Furthermore, the impact of the composite semiconductor layer thickness on the device performance was studied. Devices with the thinnest semiconductor layer showed the largest enhancement from the plasmonic particles. This result was further confirmed with modelling of the near- and far-field effects of the plasmonic particles, showing a greatly increased absorption close to the particle surface.
These findings indicate the need for careful control in the design of plasmonic nanoparticles, as well as show the great potential for utilizing plasmonic materials in solar cells.