Impact of lipid-lipid interactions on lateral segregation in bilayers 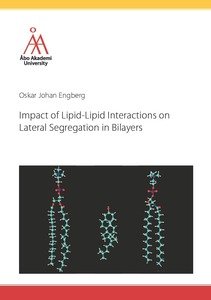 The vast diversity of lipid species found in cells suggests that structural variation of lipids is essential for the normal function of the cell. One essential reason could be the formation of lateral heterogeneity in cell membranes, first associated with the polarized transport of membrane proteins in the intestinal epithelia. To learn more on the lipid-lipid interactions governing this lateral heterogeneity, different techniques have been utilized to study lipid interactions in both simple and more complex model membranes. Small structural nuances in the lipids can lead to very different lipid interactions. In the papers of this thesis, we have studied the connection between phospholipid (PL)-PL and cholesterol-PL interactions and how these interactions affect phase separation and likely also nanodomain formation in biological membranes.
In paper I, we have studied how sphingolipids with different head groups induced lateral segregation and altered acyl chain order in unsaturated fluid phosphatidylcholine (PC) bilayers. This was achieved by using different phaseselective probes. The size of the head group on the sphingolipid determined the miscibility of the sphingolipid. When temperature was raised so that the miscibility of the sphingolipids was higher, an increase in sphingolipid concentration increased acyl chain order in the fluid phase, as cholesterol did at all temperatures.
In paper II, deuterated PLs and fluorescent lipid-analog probes were utilized to understand cholesterol interactions in complex bilayers containing N-palmitoylsphingomyelin (PSM) and glycerophospholipids (GPLs) with different head groups. Cholesterol-induced ordering of PLs and the effect of cholesterol on ordered domain thermostability were examined. Cholesterol seemed to have more favorable interactions with PSM even in the presence of the other GPLs, while it did not favor any particular GPLs over the others, at least at the lipid compositions examined.
In paper III, we investigated the effects of unsaturation in PCs and the difference between saturated PC and SMs on lateral segregation. It was found that the number of double bonds in the unsaturated PL had larger impact on lateral segregation in the presence of cholesterol. This was related to the sterol affinity for unsaturated PL. In addition, the different sterol affinities of saturated di-palmitoyl-PC (DPPC) and PSM resulted in strongly promoted phase separation with PSM but only slight promotion with DPPC, especially in bilayers containing polyunsaturated PC. This was explained by the relative sterol affinity difference between saturated and unsaturated PLs. The experimental setup with sterol partitioning experiments and lateral segregation measurements with fluorescence spectroscopy could possibly be used to estimate in which cells and organelles nanodomains are most likely to form.