Regulation of cellular stress proteins in physiology and disease 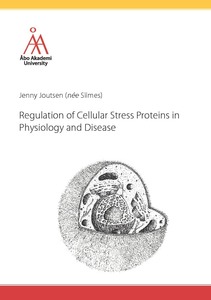 All cells in a human body are constantly exposed to environmental fluctuations to which the cells must respond. Most of the cellular responses are mediated by proteins that are specifically regulated according to the distinct requirements of the cell. Among various protein regulatory mechanisms, modulation by post-translational modifications (PTMs), such as phosphorylation or sumoylation, provides an efficient and rapid means to alter protein function. PTMs have an incredibly vast selection of target substrates and thus are involved in nearly every aspect of cells´ life. The fast modulation of cellular response pathways is particularly important during stress, which often poses a threat to cell survival unless mitigated appropriately. One of the most extensively studied cellular stress response pathways is called the heat shock response, which is initiated upon exposure to protein damaging conditions. Heat shock response is mediated by heat shock transcription factors (HSFs), which assist in the restoration of protein homeostasis, by activating the transcription of genes encoding for molecular chaperones. Of the mammalian HSFs, HSF1 is considered the main regulator of heat shock response. During its activation-attenuation cycle, HSF1 is extensively modified by PTMs, which accompany the acquisition of transcriptional activity. For this, the modifications are considered as a prerequisite for HSF1 activity, though their exact importance has not been conclusively examined. Due to its ability to potently enhance cell survival during stress, HSF1 is regarded as a powerful enabler of carcinogenesis and high HSF1 expression has been detected in multiple human cancer types. HSF2, on the other hand, is mainly recognized as an important regulator of other differentiation and developmental programs, but its role in proteotoxic stress and in human malignancies is currently uncharacterized.
In the first study of this thesis, I focus on sumoylation as a post-translational regulator of protein function and describe a novel method to examine sumoylated proteins in vivo in cells. The method is based on engineered human SUMO1 and can be utilized in the identification of novel sumoylation substrates. The second study examines HSF1 phosphorylation and aims at understanding the importance of this modification as a regulator of HSF1 activity. The results presented in this thesis show that hyperphosphorylation is not required for HSF1 activity, but functions more as a fine-tuning mechanism for heat shock response. In the third study, we aimed at expanding our understanding on the role of HSFs in human malignancies. The study demonstrates that in contrast to oncogenic HSF1, HSF2 functions as a suppressor of prostate cancer invasion and shows that HSF2 downregulation promotes metastatic behavior of prostate cancer cells. Finally, the fourth study examines the role of HSF2 in proteasome inhibition-induced prolonged proteotoxic stress and establishes HSF2 as an essential cell survival factor in these conditions. Moreover, the work identifies HSF2-dependent expression of cadherins as a key determinant of cellular sensitivity to proteotoxic stress and thus greatly expands our knowledge regarding HSFs as factors promoting cell survival. Taken together, the work presented in this thesis elaborates on HSF-mediated cellular survival pathways and lays a ground for future studies regarding HSFs as important regulators of human physiology and disease.