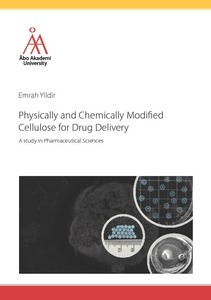 Modern advances in pharmaceutical industry have raised the interest in designing, modifying and regenerating polymers which can improve the quality of final dosage forms. Cellulose, as the most abundant biopolymer on the world, has been extensively studied by scientists over decades. Characteristics of the natural form of cellulose can be altered by physical and chemical modification methods depending on the attributes needed for the end product. These methods aim to break the hydrogen bonds between cellulose chains or replace a hydroxyl group with a functional group, in order to obtain the desired properties.
The aim of the present work was to investigate the pharmaceutical applications of cellulose beads and discs which were produced by a novel, environmentally friendly, physical and chemical modification technique of natural cellulose. First, we investigated drug entrapping and release abilities of novel porous cellulose beads which were formed by dissolving cellulose in sodium hydroxide-urea-water solvent system and then dropping the solution into an acidic medium. Next, the cellulose beads were chemically modified by oxidation and these oxidized, negatively charged beads were loaded with cationic drugs to study the effect of opposite charges on drug entrapment and release. As final step, dissolved cellulose was shaped into another geometric form; namely discs, by changing the properties of the precipitation medium to explore their possible usage in oromucosal drug delivery.
In conclusion, the results showed that non-oxidized beads, oxidized beads and discs can be used as a versatile excipient for the production of different pharmaceutical dosage forms. However, comprehensive evaluation of the full potential of cellulose beads and discs need further investigation.