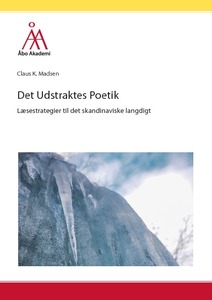 The long poem has never been thoroughly discussed in Scandinavia.
The term is largely used eponymously, unrelated to
any tradition or canon, and primarily understood in contradiction
to the traditional, short poetic form, commonly known
as “centrallyrik”, which dominates the general understanding of poetry
in Scandinavia.
In this thesis, I develop a critical understanding of the Scandinavian
long poem by exploring the following questions:
1) What is the term’s intended use in Scandinavia?
2) What does poetry develop in an extended form?
3) What possibilities does the term offer the Scandinavian literary field?
Applying different reading strategies motivated by the term long poem, I
answer these questions in three parts.
In the first part, I discuss the extent to which previous discussions
can inform a critical understanding of the Scandinavian long poem. Here,
I conclude three things: firstly, that the German term Langgedicht is
adopted from the Anglo-American tradition; secondly, that Anglo-American
discussions characterise the long poem as an in-between-ness, in its
transgression, its exteriority and its complicated wholeness; and thirdly,
that these qualities present the Anglo-American long poem as a loose
term as well, but with a canon and tradition to support its use. Consequently,
the previous discussions can inform a Scandinavian discussion,
but to do so they need to be grounded in Scandinavian poetry.
In the second part, I examine how specific Scandinavian long poems
differ from a conventional understanding of poetry. I conclude that in a
long poem, what is generally understood as the lyrical subject is enveloped
in the discontinuity between enunciation and statement, so by the
poem’s extended reflections on its materialities and voices lyrical inwardness
becomes more of a lateral critique of discourse. And as the lyrical
moment is prolonged, it evolves into a wholeness formation that turns
the lyrical remark into more of a holistic statement on either complexity
or entanglement. Subsequently, I use these points to situate the long
poem in opposition to the lyrical tradition and thereby establish a broader
understanding of poetry in the Scandinavian literary field.
In the third part, I develop fresh perspectives on poetic wholeness
and its development of meaning. On the one hand, I demonstrate how a
long poem, when motivated by either content or expression patterning,
constitutes a wholeness formation that either assembles or includes material.
This distinguishes two types of poetry by their either immediate
or mediate aspect on wholeness. On the other hand, I also describe how
a long poem may develop meaning at the level of non-meaning, e.g. letters.
This demonstrates both how extended poetry may develop singular
statements and how a long poem can motivate meaning through either
intentional or perceptional means.
In all, my study discloses the term’s employment of two traits peculiar
to extended poetry: one, being elongated, it establishes form and
wholeness, while, two, it as poetry confronts systematics and the prosaic.
I demonstrate how to read these complementary traits as a modern poetics,
understood as an opaque language use, where long poetry’s polyvalent
or unclear language calls for a “reading of resonance”, which either leads
back to the enunciation–statement continuum or to poetry as material.
The first motivates a “lateral critique” of discourse, as an ethical dimension
of long poetry. The latter calls for a reading of poetic “wholeness
formation” as something more of a political dimension.
In consonance, the three parts and the poetics they shape, expand
on the Scandinavian literary field of poetry and inform a critical understanding
of the long poem.