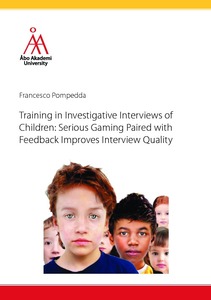 Pompedda, Francesco
Åbo Akademi University
This publication is copyrighted. You may download, display and print it for Your own personal use. Commercial use is prohibited.
Visa fullständig post
Publikationens permanenta adress är
http://urn.fi/URN:ISBN:978-952-12-3679-2

Interview quality (i.e., adherence to best practice) in alleged child sexual abuse (CSA) cases remains low. Training programs have been developed in order to tackle this problem. However, these programs are usually not successful in creating stable effects over time, or when positive results have been achieved, programs are often logistically complicated and expensive in addition to requiring a lot of time from those participating. The general aim of the present thesis was to create and test an interview simulation tool (EIT®). This tool was used to train interviewers to use more recommended questions through multiple practice occasions in combination with the administration of detailed, immediate and continuous feedback, but without excessive time and cost burden. We thus applied a serious gaming approach in which trainees interviewed computer-generated avatars equipped with response algorithms and predefined memories to explore the feasibility of this approach to train interviewers in alleged CSA cases. In all the studies presented in the present thesis, we operationalized interview quality as recommended and not recommended questions asked, relevant, neutral and wrong details elicited from the avatars or children and correct conclusions reached concerning what had happened to the avatars or children.
In Study I, we showed how interviews with avatars combined with feedback improved the quality of simulated investigative interviews in a group of students compared to a group of students that conducted the interviews without feedback. We also showed that knowledge regarding evidence-based principles relating to CSA investigations did not influence the quality of interviews. Here, we used a combination of outcome (i.e. information regarding the conclusion of the story) and process (i.e. information regarding the question types used) feedback simultaneously.
In Study II, we separated between the two types of feedback and showed that the combination of feedback enhanced training effects to a higher degree compared to the process and outcome feedback provided alone. For example, a combination of feedback elicited medium/strong effects (dppc2 = 0.76) in improving the percentage of recommended questions in only four interviews.
In Study III, we used a new set of algorithms to relate interviewer questions to avatar responses. In the previous studies, the algorithms were mechanical (i.e., after a certain number of recommended questions an operator provided a detail). Starting from Study III, we used probabilistic algorithms that related interviewer questions to avatar responses probabilistically (in both cases the probabilities themselves were derived from research on child memory and suggestibility). In Study III, we also tested if a simple reflection task enhances training effects. The reflection task did not enhance training effects compared to the group that received a combination of the two previously used feedback types. This study replicated previous results regarding the effect of avatar interviews combined with feedback on interview quality. For example, 90% of participants in the two groups that received feedback improved their use of recommended questions, and 38% reached a reliable change in their use of recommended questions in only two hours.
In Study IV, we showed that the improvements in interview quality achieved in student samples in Studies I-III were also achieved in a group of psychologists. The second and most important result of Study IV was that the improvements achieved during the training also transferred into interviews with actual children who had witnessed a mock event. During these interviews, that occurred one week after the training, the feedback group asked 40% of recommended questions compared to the control group who reached 26%.
The results of training were analyzed using a mega-analytic approach in the present thesis combining the results of the individual studies. The results showed how simulated interviews with avatars and the provision of a combination of outcome and process feedback improved in a robust manner the quality of simulated investigative interviews compared to a control group.
Overall, the results provide support for the use of a serious gaming approach to training interviewers. Previous research clearly shows how important it is to interview the child in the most neutral way possible when there is suspicion of abuse. Because of this, providing interviewers with a new, interactive and efficient tool together with providing police departments or training institutions with a realistically applicable, time-and-cost efficient training protocol can change the way we plan and organize training in this context.