Wood extractives in conifers : a study of stemwood and knots of industrially important species 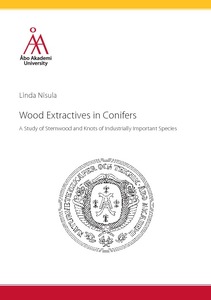 Nisula, Linda
Åbo Akademis förlag - Åbo Akademi University Press
This publication is copyrighted. You may download, display and print it for Your own personal use. Commercial use is prohibited.
Näytä kaikki kuvailutiedot
Julkaisun pysyvä osoite on
http://urn.fi/URN:ISBN:978-951-765-892-8

Throughout the years, extractives have been studied with various analytical methods, and it has been found that different tree species contain different types and amounts of extractive compounds. However, many studies have been incomplete and the number of methods used has been almost as vast as the number of publications, making it difficult or even impossible to compare the results of different studies.
This thesis contains data on lipophilic and hydrophilic extractives in heartwood, sapwood and knots of 39 industrially important conifer species: 14 pines (Pinus), 7 spruces (Picea), 9 firs (Abies), 5 larches (Larix), 3 hemlocks (Tsuga) and Douglas-fir (Pseudotsuga). The wood samples were sequentially extracted, and the amount and composition of resin acids, fatty acids, sterols, steryl esters, acylglycerols, juvabiones, lignans, oligolignans, flavonoids and stilbenes were analysed by gas chromatography (GC) and GC-mass spectrometry. The main conclusions were that:
• there are major differences in amount and composition of extractives, not only between genera, but also between species, especially regarding the hydrophilic extractives;
• lignans are present in heartwood and knots of all genera. The knots, however, contain remarkably more, in some cases several hundred times more, lignans than the adjacent heartwood. Some spruce, fir, larch and hemlock species contain especially high concentrations of lignans. Hydroxymatairesinol is the dominating lignan in spruce and hemlock, while secoisolariciresinol dominates in fir and larch;
• considerable amounts of flavonoids are found in all larches, some of the pines and in Douglas-fir;
• stilbenes are present in heartwood and knots of all pines;
• considerable amounts of juvabiones are found in all firs, some pines and in Douglas-fir. The concentrations are significantly higher in knots than in ordinary stemwood; and
• pine heartwood and pine knots in particular contain much more resin acids than the sapwood.
Lipophilic extractives are known to cause problems in pulp and paper mills, mainly in the form of deposits and specks. On the other hand, they can be recovered and utilized as tall oil and sterol-based products. The hydrophilic compounds are not detrimental in pulping and papermaking. They do, however, exhibit strong bioactivity and play a significant role in the protection of trees against insects, bacteria and fungi. Several of these compounds are strong antioxidants, and some are already used as active agents in dietary supplements and cosmetic products. The extraction, purification and utilization of these bioactive polyphenols should be further studied and developed with special focus on the knots of the most promising conifer species.
This thesis provides a unique collection of data on extractives in conifers, probably the most comprehensive study ever published. The book is not meant to be read from cover to cover, but rather to be used as a reference when information is needed on amount and/or composition of extractives in conifers.