Winds of change : on irregular warfare 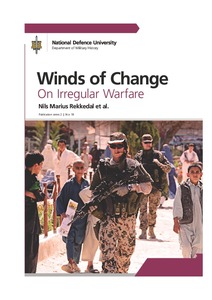 The various forms of irregular war today, such as insurgency, counterinsurgency and guerrilla war, are normally characterised by the distinctive features of a geographical area. The so-called wars of national liberation between 1945 and the late 1970s were disproportionately associated with terms like insurgency, guerrilla war and (internal) terrorism. Use of such methods signals revolutionary intentions, but the number of local and regional conflict is still relatively high today, almost 40 years after the end of the so-called ‘Colonial period’.

In this book, we provide some explanations for the ongoing conflicts. The book also deals, to a lesser extent, with causes that are of importance in many ongoing conflicts – such as ethnicity, religious beliefs, ideology and fighting for control over areas and resources. The book also contains historical examples and presents some of the common thoughts and theories concerning different forms of irregular warfare, insurgencies and terrorism. Included are also a number of presentations of today’s definitions of military terms for the different forms of conflict and the book offer some information on the international military-theoretical debate about military terms.