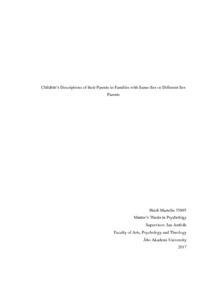 Children’s perceptions about their parents are thought to partly mediate the link between parent behavior and child development. Previous research suggests children perceive mothers and fathers differently, but children’s perceptions of same-sex parents have not previously been comprehensively investigated or compared to children’s perceptions of different-sex parents. To investigate whether children’s perceptions of their parents are formed by family type, parent gender or biological relatedness to child, we conducted a content analysis of interviews with 29 Finnish children in families co-parented by same-sex (female–female) or different-sex (female–male) parents. We also gathered information from parents about division of childcare responsibility, time spent with the child and six parenting dimensions. Our results suggest no systematic differences between children’s descriptions of the four parent types. A clustering of parents based on similarity of descriptions indicated that family type, parent gender and biological relatedness to the child did not systematically explain the variation in children’s descriptions of parents. While our results indicated no differences between parent types, the results need to be interpreted with caution due to small sample size.