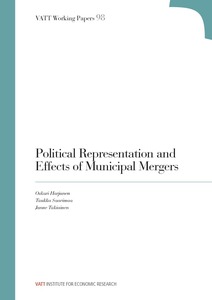 We study the effects of municipal mergers using novel geocoded data on public sector jobs, housing transactions and local politicians’ place of residence. We find that total municipal expenditures evolve in the same way on average in merged municipalities as in the control group of hypothetical mergers that did not take place. These findings hide substantial heterogeneity within the mergers. Those municipalities that gained only weak political representation in the new post-merger council experience a substantial reduction in local public jobs in administration, and health and social care sectors relative to the municipalities in the same merger that were more strongly represented. This result implies that the mergers had an effect on the within merger spatial distribution of municipal services. However, we do not find conclusive evidence concerning welfare effects. This might be explained by a distance-quality trade-off related to these services.