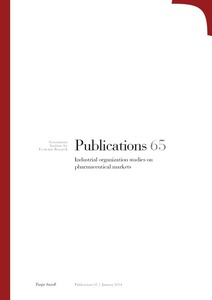 This thesis consists of three essays on the industrial organization of pharmaceutical markets. In Chapter 1, I introduce the three essays and present the main results. In Chapter 2, I measure how uncertainty and learning through experimentation affect the medical decision-making by physicians. I estimate a dynamic model of demand where physicians may learn the effectiveness or side effects of drug treatments from their prescription experiences. In the model, physicians may want experiment new drugs for their patients to get valuable information for their future drug choices. At the same time, risk aversion can make physicians reluctant to try less well-known, but potentially superior products for their patients. Using data from the Finnish market for cholesterol drugs, I find that medical decision-making is characterized by habit persistence and heterogeneity in the effectiveness of drug treatments across patients. My results suggest that if physicians would become more willing to experiment with their treatment choices, the process of learning would improve and the efficiency of medical decision-making would increase.

In Chapter 3, I quantify the roles of the physician's own experience and the past choices of other doctors in pharmaceutical demand. I develop a model of medical decision-making under uncertainty about the quality of the match between the patient and the drug treatment. Unlike previous demand models, I take into account both private and social learning and allow heterogeneity in quality across patients. I test whether information on the past choices of other physicians improves drug choices. Using rich data from the market for cholesterol drugs, I show that treatment patterns relying heavily on the past choices of other doctors can lead to over-prescription in terms of efficiency. My results suggest that continuity of care, where a patient repeatedly consulting the same doctor, is an efficient policy to limit such behavior.

Finally, in Chapter 4, I explore whether stronger patents decrease competition during patent protection. Traditionally, stronger patents have been thought to increase the profits of an innovator and to promote R&D. Economic theory predicts that longer patents may hinder rather than stimulate innovation by increasing competition during the patent period. Broad patents, on the other hand, increase the costs of imitation and decrease competition. I test the theory on the relationship between patent strength and competition during patent protection. I consider the Finnish markets for pharmaceuticals that provide rich variation in both patent length and breadth across innovations. The results suggest that patent breadth, rather than length, prevents imitation. Patent rights have no effect on the risk of parallel trade.