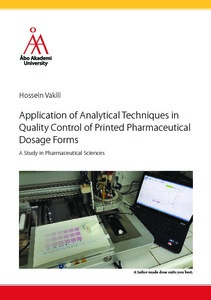 There is a need for development and production of pharmaceutical dosage forms with flexible dosing in order to achieve the essential requirements of precision medicine for patient-specific therapy. Precision medicine implicates a paradigm shift towards a new perspective both in clinical practice to include patients’ individual characteristics in a more personalized diagnosis of the disease and subsequently in formulation design and manufacturing of the tailored dosage forms for an optimal and well-tolerated therapeutic treatment.

From the drug delivery perspective, adoption of new technologies that provide dose flexibility in small batch productions has been regarded as key for on-demand production of tailored medicines for late-stage delivery at envisaged point-of-care such as in hospitals or pharmacy settings. In this regard, inkjet printing technology has been proposed in the past decade as the method that is capable of depositing extremely accurate, low and uniform amounts of drugs on various edible polymeric films which is currently being further investigated by researchers. Today, the state of the art inkjet printers with compact design, open architecture and advanced integrated visualization systems provide thorough control over the shape, size, alignment and spatial deposition of thousands of single drops in picoliter range in pixel-wise accuracy onto the printing substrates. Printed pharmaceuticals are often in the form of orodispersible formulations that rapidly dissolve in the mouth resulting in ease of administration and higher patient compliance especially for pediatrics and those with swallowing inabilities and disorder. In this way, when the drug is properly absorbed through the oral mucosa, it avoids first-pass metabolism in the liver and directly enters the systemic circulation and starts a fast onset of actions.

One of the main problems in the way of inkjet printing technology becoming a genuine, viable and commonly accepted method by regulatory agencies for continuous manufacturing of solid dosage forms is the lack of rapid, robust, reliable and most importantly non-invasive analytical techniques for real-time quality control of the printed formulations. This thesis was mainly focused on exploring a variety of analytical techniques and small-size instrumentations for the study of drug content, uniformity of drug distribution and drug release profile from the printed units.

Ion-selective electrodes were designed for continuous monitoring of the drug release from porous cellulose substrates and thin films as an attempt to propose a cost-effective and efficient alternative to conventional time and labor-intensive methods. Flexographic printing technique was used for applying several layers of highly viscous and insoluble polymeric coating on already inkjet printed formulations to achieve formulations with modified release profiles. Near-infrared (NIR) hyperspectral imaging was applied to predict the drug amount and to create concentration distribution maps that offer both statistical and visual assessments of the printed formulations. The feasibility of a compact colorimetric device was investigated in CIELAB color space for indirect estimation of the drug content in pediatric orodispersible formulations. Finally, a handheld NIR spectrometer was used together with advanced chemometrics to build predictive models for drug content analysis and classification of the dosage forms containing two poorly water soluble drugs. In addition, the application of multivariate data analysis techniques for processing and modeling of the spectroscopic data were discussed in detail. Several other analytical techniques were also applied to study the surface morphology, surface roughness, texture, mechanical properties and disintegration behavior of the raw and printed substrates together with solid-state characteristics and the stability of the inks and the drugs in formulations. The advantages and shortcomings of each formulation design and applied analytical method were highlighted and a general approach for future complimentary studies was proposed.

This research provides a deeper insight into the inkjet printing process of drug formulations and subsequently inspects the feasibility of the proposed analytical probes as fast, reliable and non-invasive quality control tools at the production line in search for bringing the concept of personalized medicine closer to reality.