Dimming Hopes for Nuclear Power: Quantifying the Social Costs of Perceptions of Risks 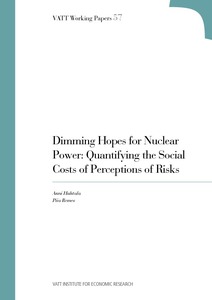 The preferences expressed in voting on nuclear reactor licenses and the risk perceptions of citizens provide insights into social costs of nuclear power and decision making in energy policy. We show analytically that these costs consist of disutility caused by unnecessary anxiety - due to misperceived risks relating to existing reactors - and where licenses for new nuclear reactors are not granted, delayed or totally lost energy production. Empirical evidence is derived from Finnish surveys utilizing alternative risk rating scales and framing in elicitation of risk perceptions associated with nuclear power across contexts. We find a considerable negative impact of a high perceived risk of nuclear accident on the probability to support nuclear power. This result holds across a number of robustness checks including an instrumental variable estimation and a model validation by observed voting behavior of the members of Parliament. The public's risk perceptions translate into a significant social
cost, and are likely to affect the revenues, costs and financing conditions in the nuclear power sector in the future. 7.11.2014 released WP was reissued 7.7.2016.