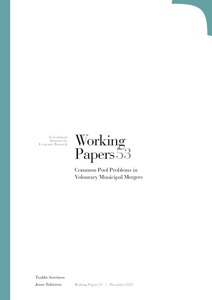 We analyze free-riding behavior by Finnish municipalities prior to municipal mergers. The merger process creates a temporary common pool problem, which arises because of a delay from the initial merger decision to the actual merger. Using a difference-in-differences strategy, we find large responses to free riding incentives. Consistent with the 'law of 1/n', the stronger the free-riding incentive a municipality faced, the more it increased its per capita debt and used up its cash reserves. These funds were spent mostly on investment and current expenditures. The results are somewhat surprising because the mergers were agreed upon voluntarily.