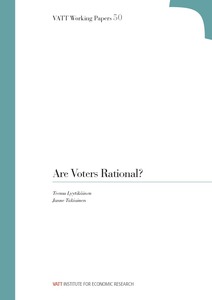 We test whether voters are rational in the sense that their decision to cast a vote depends on its expected impact on the election outcomes. We provide causal evidence on this rational voting hypothesis by using exogenous variation in pivotal probabilities that arise at population thresholds determining council sizes in Finnish municipal elections. First, we document statistically significant, economically relevant and robust effects of crossing the threshold on turnout. Second, we use simulations to measure the pivotal probabilities. Finally, we use a novel instrumental variables design to show that the changes in the pivotal probabilities rather than simultaneous changes in the number of available candidates or their quality explain the changes in turnout. Moreover, we document that turnout responds only to such pivotal probabilities that are salient to the voters, and that the effect of district magnitude on the election closeness in general or the proportionality of elections is not behind the response in turnout. Thus, the rational voter exists.
This version (January 19, 2016) replaces the September 27, 2013 version.