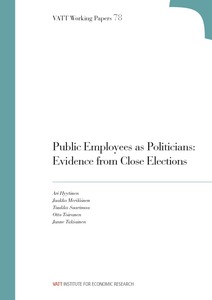 We analyze the effect of municipal employees' political representation in municipal councils on local public spending. To quantify the effect, we use within-party, as-good-as random variation in close elections in the Finnish open-list proportional election system. One more councilor employed by the public sector increases spending by about one percent. The effect comes largely through the largest party and is specific to the employment sector of the municipal employees. The results are consistent with public employees having an information advantage over other politicians, and thus, being able to influence policy.