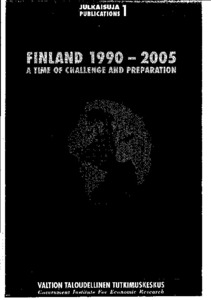 The title of the publication "Finland 1990-2005 - A Time of Challenge and Preparation" shows the main features of the report. The international economic integration, the growing global and local environmental problems, and the changes in the population age structure are the main starting points in this long term scenario for the Finnish economy.

Finland will adapt to the international division of labour through the European cooperation. Because the labour input will diminish and the growth rate of labour productivity will be somewhat slower than in the past, the growth of total production will remain about 2,5 per cent per year.

The prevention of environmental damages will be the greatest challenge for the world economy. More effective international cooperation in environmental issues is necessary. Tighter environmentan standards and higher energy taxes will raise the real price of energy thus making energy intensive products more expensive and leading to structural changes in production.

In order to decrease the net foreign debt a bigger part of investments must be financed from domestic sources that at the present, In the long run, the change in the population age structure, the improving pension security and the diminishing need to save for housing can keep the households' saving ratio low. If the saving of households will continue to remain low, the saving in the employment pension funds and the public sector saving must be kept on a high level.