1990s the economic crisis in Finland. The Research Programme of the Academy of Finland: Down from the heavens, up from the ashes. The Finnish economic crisis of the 1990s in the light of economic and social research 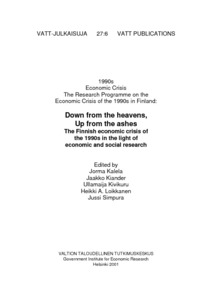 Finland experienced an exceptionally deep and long economic crisis during the first half of the 1990s. Within four years, output was reduced by more than 10 percent and the unemployment rate quadrupled to almost 17 percent. The economic crisis caused severe public finance problems and endangered the existence of the Nordic welfare state model in Finland. Since 1994 the Finnish economy started to recover from the recession. However, in spite of the recovery, the country was not the same than in 1990.
This collection of articles discusses and analyses the causes and consequences of the Finnish economic crisis of the 1990s. The articles review the roles of economic and social policies, development of inequality and poverty, individual survival, the media coverage of the crisis as well as the historical backgrounds and comparisons. The articles are based on the results of a large multi-disciplinary research programme on the Finnish crisis initiated and sponsored by the Academy of Finland.