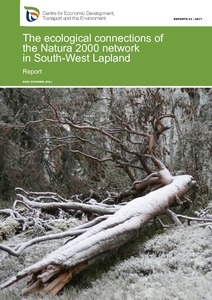 The NATNET Life+ project was launched in 2012 to increase ecological connections and coherence in South-West Lapland, particularly across conservation areas that are part of the Natura 2000 network. The ecological connections most suitable for the project’s objectives were mapped using Zonation analyses, which made it possible to target actions in areas where they could best contribute to maintaining biodiversity. A total of 121 permanent, privately owned conservation areas were established during the project under the auspices of the METSO programme. The total area covered by the conserved areas is over 2,800 hectares. This amounts to almost a third of the METSO programme’s conservation goal in the entire province of Lapland (9,120 ha).
The project carried out restoration and nature management actions across more than 1,100 hectares of land used mostly for forestry, improving the biodiversity of the areas. Restoration and nature management plans were prepared for an area spanning 1,516 hectares. In addition to establishing conservation areas and implementing restoration actions, nature management plans emphasising biodiversity values were devised in the project area for private forest owners, across an area of more than 5,000 hectares.
The protected calypso orchid (Calypso bulbosa), listed under appendices II and IV of the Habitats Directive and a Finnish species of special concern, was chosen as the project’s indicator species. An inventory of all known calypso orchid findings within the ecological corridors defined through the Zonation analysis was compiled in the project.
The NATNET Life+ project helped to increase habitat connectivity in the Natura 2000 areas and thereby to promote species mobility between the sites. The project actions also contributed to preserving the genetic diversity of species populations in conservation areas and thereby reduced the risk of extinction. The corridor areas also serve as habitats for specific species. Overall, the NATNET Life+ project is a significant nature management effort. The production of decayed wood and controlled burnings in connection with the project also significantly promote the ability of commercial forests to maintain endangered species that are dependent on decayed wood in the project area. Moreover, restoration has contributed to creating new habitats for mire species, particularly for rare alkaline fen vascular plants and species of moss as well as fungi, mushrooms, insects and game animals.