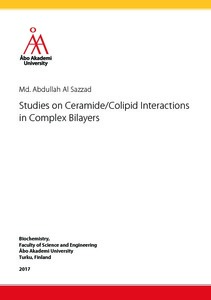 Ceramide belongs to an important class of sphingolipids and it constitutes the hydrophobic backbone of all complex sphingolipids. Ceramide plays an important role in different biological processes such as cell signaling, proliferation, differentiation and apoptosis. Particularly, the role of ceramides in apoptosis has received special attention in recent years. In addition, it is been suggested that the membrane biophysical properties are affected upon generations of ceramide. Therefore, ceramide-related membrane phenomena have become a subject of great interest both in cellular and in model membrane studies. This thesis focuses on investigating how specific structural details of ceramides influence their interactions with other lipids present in the membrane bilayers. The ceramide structure varied with regard to length of both the N-acyl chain and long-chain base, interfacial hydroxylation, identity of the headgroup, and the position of cis-double bonds in the chains. We have also examined how the structure of the associated lipids can influence the ceramide-rich phases in bilayer membranes.

Our results demonstrated that structural variation among ceramides leads to differences in their behavior in the membranes. The length of the long-chain base of ceramides had a larger effect on ceramide-colipid interactions compared to the effect of N-linked acyl chain length. In addition, the presence of cis-double bonds and their comparative position also caused an important effect on ceramide properties. When we studied how the lateral segregation of ceramides are influenced by the degree of unsaturation of different glycerophospholipids, we observed that these lateral segregations were affected by the overall degree of unsaturation of the sn-2 acyl chain of the PCs. We have also investigated the effect of hydrogen bonding between sphingomyelin (SM) and ceramides or cholesterol interactions. Our findings demonstrated that these interactions are markedly affected by hydrogen bonding properties. Overall, the results of this thesis showed how the gelphase forming properties of ceramides are influenced by their molecular structure and the colipids present in the membrane bilayers, which may have distinct effects on cell physiology.