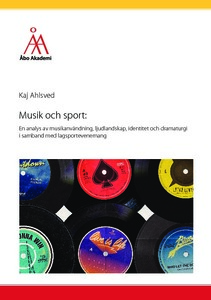 The aim of this article dissertation is to study the use of music in sporting contexts. I have primarily focused on practices related to the use of recorded music during team sporting events in Finland. This is divided into three interlocking questions: How is music used during team sporting events to shape and change the soundscape of the event? What role does the music have in shaping the dramaturgy of the sporting event? How does music contribute in the construction of local and national identities, both in and outside the sports arena?

I approach music at sports events as an example of “music in our everyday life”, by which I refer to music that one has not necessarily chosen to listen to in situations driven by something other than listening to music. Viewed from this perspective, music during sporting events is connected to discussions about the ubiquitous music of our everyday life.

My research perspective is influenced by the central ethnomusicological idea of viewing music as culture, which ultimately implies studying musical practices as well. My research is influenced by cultural musicology (the cultural study of music), soundscape studies, and ethnomusicology. These are methodologically connected by fieldwork, as in experiencing the culture out in the field. I have concentrated on male teams in ice hockey, football, and pesäpallo (“Finnish baseball”),which are sports that do not presuppose music, but music frames the sport in a cultural context. The empirical material analysed in the dissertation consists of fieldwork diaries, interviews, sound recordings, and different types of video recordings (own recordings, tv-broadcasts and YouTube videos); as well as recorded songs, media texts (books, newspapers, social media etc.), and enquiries.

In the first article ”Det är hemmaplansfavör!” Strukturerna i tre sporters ljudlandskap studerade ur ett hi-fi/lo-fi–perspektiv [“It is home-field advantage!” The structures of three sports soundscapes studied from a hi-fi/lo-fi–perspective] I study the structures of three sports soundscapes, namely ice hockey, football, and pesäpallo, by applying central soundscape theories from R. Murray Schafer (1977) and Barry Truax (1984) on my own empirical material.

In the third article The cultural practice of localizing mediated sports music I study mediaization processes, such as the practices and processes that facilitate the localization of media disseminated music. The material for the study comes from many sporting contexts and via unique material on the use of marching music I shed light on how old military marches are ascribed new meanings within the context of Ostrobothnian football culture.

In the fourth article Musik, ishockeylejon och konstruerandet av en nationell gemenskap [Music, ice hockey lions, and the construction of a national community] identity construction is studied from a national perspective. I study the music culture related to the Finnish national men’s ice hockey team and argue that the national team represent an imagined community. The use of music, particularly the new music that is produced preceding the men’s World Championships, is viewed as a form of banal nationalism that makes the nation present in everyday life.

My research shows that the problematization of so-called ubiquitous music, which in earlier research has been discussed in relation to active and passive listening, is in sporting contexts supplemented by yet another complex aspect. The use of music, played by sport DJs, in sporting contexts does not only strive to make the soundscape more pleasant, the aim of the music can also be to activate the audience to make own sound. In sporting contexts there can exist culturally meaningful rituals which are carried out to the music and are connected with identity construction. The music of the sports arena does not merely reflect, rather, it can support the construction of identities, as it becomes a part of cultural practices in local or national sporting communities.

TV-productions often focus on fans and supporters, which play the ideal role that supporters are supposed to act out. The audience behaviour and sound not only creates the atmosphere of the event but also authenticates the event as something great, important, and deeply engaging. While the study shows how the sounds created by the audience and the audience’s active participation are important for the atmosphere of the event this is not solely unproblematic since it also includes playing more music, which in worst case scenarios can cause cacophonic situations.