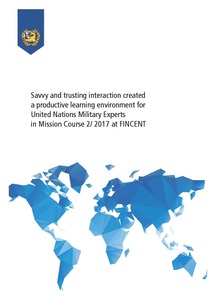 This report reflects on the experiences of UNMEM 2/2017 arranged by the Finnish Defence Forces International Centre FINCENT in cooperation with Nordic Defence Cooperation NORDEFCO and the Crisis Management Center Finland between 4 August and1 September 2017. This was the first UNMEM course ever where the majority of the participants were female. Therefore, I was invited to conduct an observation analysis of the course looking to answer the question of how the new course composition reflects on learning.

In practice, the UNMEM aim is to generally prepare the participant for duties in a peacekeeping operation so that he/she can fulfil the military aspects of UN peacekeeping mandates in accordance with DPKO principles and guidelines, perform his/her duties in an effective, professional and integrated manner and demonstrate the core values and competencies of the United Nations (see: UN Ref. 2016.25, Annex J, UNSCR 2242/2015, UN Ref. 2010.30, FINCENT 2017). These principles and guidelines were used as the backbone of the observation process.

The main observation from UNMEM 2/2017 was that the course instructors and students together created a learning environment where all students had the possibility to learn and grow professionally. From the student performance perspective, it is notable that individual team skills as well as proficiency in the English language played a major role in the overall learning process. In short, the experiences from UNMEM 2/2017 strongly suggest that group composition should be 50% males and 50% female.

Performance and the learning process under the spotlight of the observation

In this unstructured observation study, the United Nations Military Observers (UNMO) Skill Set Requirements (UN Ref. 2016.25, Annex J) were generally reflected in the detectable behaviour and action of the participants both during classroom and outdoor sessions. In addition, the spontaneous and unofficial discussions with the participants and instructors as well as the formal feedback are noted in this report.