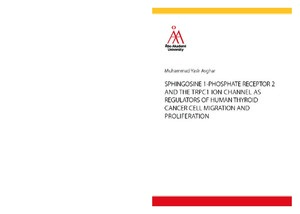 Thyroid cancer is the most common endocrine cancer and currently there is no effective treatment available against the most aggressive and highly invasive forms of thyroid cancer. Sphingosine 1-phosphate (S1P) is a bioactive lipid which binds to S1P1-5 receptors and activates different G-proteins and their associated downstream signaling pathways. S1P receptors and Transient receptor potential canonical (TRPC) calcium channels are ubiquitously expressed in human tissues and regulate many cellular processes including cell migration and proliferation.

In the first study, we showed that the S1P1-3 are expressed in the anaplastic thyroid cancer (ATC) cell line C643. S1P attenuated the invasion and migration in these cells by binding to S1P2, which strongly couples to G12/13 protein and activates the Rho and ROCK pathway. In addition, we detected the expression of a non-conducting form of the ether a’-go-go related gene (HERG) potassium channel protein and characterized the significance of this channel in the regulation of ATC C643 cell migration. We found that S1P transiently decreased the expression of HERG protein. Thus, the S1P evoked attenuation of migration in these cells is, in part, due to the decreased expression of the HERG potassium channel protein.

The identity of TRPC channels in human thyroid is unknown. In the second study, we investigated the expression of transient receptor potential canonical (TRPC) channels in human normal thyroid and follicular thyroid cancer (FTC) ML-1 cells, and described the function of TRPC channels in ML-1 cell migration and proliferation. We reported that several TRPC isoforms, including TRPC1, are expressed in these cells. To investigate the importance of TRPC1 in human thyroid cancer, we generated stable TRPC1 knock-down cells (TRPC1-KD). We showed that in the ML-1 cells, TRPC1 functions as a receptor operated calcium entry channel (ROCE), but not as a store operated calcium entry channel (SOCE). In addition, the invasion, migration and proliferation were attenuated in TRPC1-KD cells. An interesting finding here was that the pro-migratory receptors S1P3 and the vascular endothelial growth factor receptor 2 (VEGFR2) were down-regulated in the TRPC1-KD cells, and we could rescue this effect by restoring TRPC1 in TRPC1-KD ML-1 cells. Thus, the effect on receptor expression was mediated through a calcium-dependent mechanism mediated by TRPC1 channel activity. In addition, the expression of the downstream entities including PKCβ, PKCδ and ERK1/2, which are involved in S1P3 evoked expression of VEGFR2 and hypoxia-inducible factor 1-alpha (H1F1α) were downregulated in TRPC1-KD cells. Furthermore, the secretion and activity of matrix metalloproteinase 2 and 9 (MMP2 and MMP9) was attenuated in TRPC1-KD cells. These results highlight the importance of TRPC1 channels in thyroid cancer cell migration and proliferation.

The extracellular matrix (ECM) is a highly dynamic and complex assembly of numerous structural and functional proteins. After acquiring a migratory phenotype, cancer cells secrete matrix metalloproteinases (MMPs), which break down the ECM (mainly collagen) and facilitates invasion. In the last study, we found a novel mechanism by which S1P, through activation of S1P2, can regulate cancer cell invasion. In the ATC C643 cells, S1P attenuated the expression, secretion and activity of MMP2 and to a lesser extent MMP9. The inhibitory effect on at least MMP2 is mediated through the Rho and ROCK pathways. In addition, S1P attenuated the activity of calpain, resulting in decreased secretion of active MMP2 and MMP9.

Taken together, the information presented in this thesis can be of significance when designing novel strategies to curtail aggressive and metastatic thyroid cancer and possibly cancers in general.