A cinematographic fence and ornamental oars: experiencing the sublime in structures of urban public space 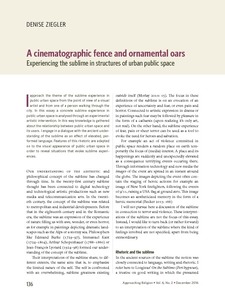 Denise Ziegler
DFA Denise Ziegler is a Helsinki based artist and researcher of public space. She received her doctoral degree at the Academy of Fine Arts in Helsinki. She is currently a postdoctoral researcher at PUPA (Pori Urban Platform) at Aalto University, Finland. In her recent project she has been developing a new kind of understanding of public urban space through experimental artistic interventions.