Iconography transformed: a few notes on the god Vaiśravaṇa 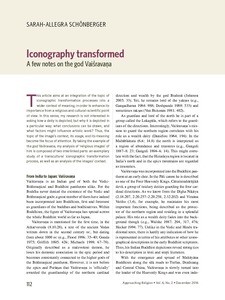 Sarah-Allegra Schönberger, University of Vienna
Sarah-Allegra Schönberger is a doctoral assistant at the University of Vienna, holding a BA in Japanese studies and an MA in religious studies. She is currently completing her dissertation project on iconographic transformation processes. Her research focuses on religion and visuality, on Buddhism and East Asian religions as well as on religious nationalism. She has conducted field research in Japan and gained teaching experience at the universities of Vienna and Aberdeen. Alongside her academic career she has worked as a freelancer at the department for religions at the national Austrian Broadcasting Corporation.

This article aims at an integration of the topic of iconographic transformation processes into a wider context of meaning, in order to enhance its importance from a religious and cultural-scientific point of view. In this sense, my research is not interested in asking how a deity is depicted, but why it is depicted in a particular way; what conclusions can be drawn, and what factors might influence artistic work? Thus, the topic of the image’s context, its usage, and its meaning become the focus of attention. By taking the example of the god Vaiśravaṇa, my analysis of ‘religious images’ of him is composed of two interlinked parts: an exemplary study of a transcultural iconographic transformation process, as well as an analysis of the images’ context.